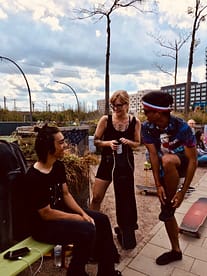 Now that we’ve gotten that out of the way, I’d like to write up a short recap on a personal experience I had this past weekend, participating in my first ever longboard competition!

The AWHOU 2019 Hamburg Longboard Open took place last weekend in the lovely city of Hamburg in Germany. This was my first real competition, so I can’t really gauge it on its size, but I would be inclined to say it was a small to medium-sized event. AWHOU is a very active and well-known longboarding community here in Germany, so they got a pretty good turnout. Overall we had just over 20 total participants in the main competition, really from all levels ranging from beginner longboarders to pro-level riders that are already sponsored by big names in the industry, such as Paris Truck Co, and there was probably a solid 100 or so people in the crowd throughout the day watching the event and enjoying the atmosphere.

It was an adrenaline packed day, and as a first-time competitor myself, here are my main takeaways to help others who are considering joining their first competition. Oh and by the way, you’ll def want to check out my article on creating a longboard carrying system for less than 5€ if you’re gonna start traveling for stuff like this. Lugging the Walzer around all weekend can really be a pain in the ass 🙂

My 6 best takeaways from my first longboard dancing competition

1. Should beginners join a competition?

A huge and resounding YES! This was such a cool experience for me, I wouldn’t say I am an absolute beginner rider, I can shred a weeeeee bit, but I’m definitely still on the newer end of the spectrum, and taking part in this was rewarding in so many ways. I got to meet so many amazing people, and take in so much great energy, and those two things alone make it worth it. If you’ve never been in an environment where you’ve been surrounded by other people who share your passion, prepare for an overload of good vibes.

Speaking specifically for Europe, the network here is pretty tightly knit, and is VERY supportive. Your level really doesn’t matter that much, the main thing is we wanna get a bunch of passionate longboarders together to spread the love. So everyone gets cheered on, beginner to pro, and that is pretty damn cool.

This was a big mistake for me, because for the last month or so I have been really hammering down my line, which I felt pretty comfortable with. Butttt when I showed up to the competition, the skate area was much shorter and narrower than I was used to, and it threw my timing and planning way off. Be especially mindful of this if you are more on the dancing side, because we typically need lots of space to get all of our steps and carves on, and you might find yourself suddenly not having this.

Therefore it’s better to get used to practicing shorter sequences while simultaneously getting comfortable with many smaller variations instead of just mastering an entirely pre-planned line in your head. This way you can stay flexible, and adjust your performance as needed depending on the conditions. Some competitions may announce the dimensions of the skate area, some may not, so have a good array in your pocket before you go.

This is probably my biggest takeaway for a beginner, the shortness of the course caused me to almost do a shuvit into the DJ booth haha.

3. You can come off your board, if you are not in the middle of a trick / dance sequence

This is another big tip I have, because no one told me about it before I did my run -> You’re allowed to step off your board and change directions, as long as you’re not in the middle of doing a trick or a step! This sounds like a small thing, but if you don’t know this, like me, it can be confusing. I surely wasn’t planning to win this competition, but in my un-knowing head, I thought if I step off the board at all I might lose points. So when I got to the end of the previously aforementioned short skate area, I did this super big awkward turn to get me back on the path to go back on the skate area so I could do my second pass…This looked stupid, and wasted about 15 seconds of my time, when I could have just stepped off, turned around, kicked again, and have been on my way again with my performance.

4. Don’t over train or obsess about going up for your run

There’s gonna be a lot of great energy going around when you show up to these events, you’re gonna see a lot of new and familiar faces, boarding around, having a good time, and naturally you’re gonna wanna be a part of that.

But like all things where nerves set in, you’re probably gonna freak yourself out. So just show up, warm up of course to avoid injury, and maybe just kinda play along with your line a bit, but there’s no need to beat it into the ground the day of the competition. It’s in you already, rely on your flow, and feel the music.

5. If you jam with music on, practice with LOTS of different music

These competitions have DJs, or at least some kind of music playing, and chances are you won’t have any control over it. UNLESS you make it to the final round in a competition, then sometimes they allow contestants to specify a certain song.

So just like tip number two, if you get too used to one song, or one playlist, and suddenly have something COMPLETELY different that you gotta ride to, it’s gonna get in your head. So make a playlist with a bunch of random-ass songs in it, and just get used to adjusting to different highs, lows, drops, tempos, and styles.

6. Don’t be afraid to push your limits during your lines

I practiced my line so hard going into this, because I was so determined to finish my run without any mistakes. But in reality, every single participant made some kind of mistake at some point, even the pro riders. This was cool for me for two big reasons:

Unfortunately at this competition, I was the second one up, so I didn’t get to see too many people make mistakes in the later phases of the competition, so this lesson came a bit too late for me, but that’s why I’m here for you guys! 🙂

Yeah I know, you wanna see the line don’t you?

So here it is, in all of its un-edited glory! You’ll see all the things I mentioned in this article, included my super long awkward turn, and also almost shuving it into the DJ Stand haha.

So what are my next plans for longboard dancing competitions?

Well I’ve actually got a pretty full August with longboard competitions! As mentioned this past weekend I had the AWHOU Hamburg Longboard Open, on the 24th I’ll be participating in a longboard contest at Pangea ABOUT YOU in the North of Germany, and on August 31st I’ll be heading down to Paris to attend, and maybe compete in, 360 Paris Longboard Dancing Open, the biggest longboard event in Paris to date.

I’m hooked on it, and just keep meeting more awesome people at every event, so you guys should get in on the madness! <3

Shawn is the founder of Longboard Dancing World and is also an avid longboard dancer. When he's not boarding or building this community, he can be found doing other marketing stuff professionally, or trying to find the best vegan cakes in Leipzig.

Best longboard for dancing: What beginners should know

What is longboard dancing?

Longboard Dancing Camp: How it can change your life

How to kickflip a longboard

Manage Cookie Consent
To provide the best experiences, we use technologies like cookies to store and/or access device information. Consenting to these technologies will allow us to process data such as browsing behavior or unique IDs on this site. Not consenting or withdrawing consent, may adversely affect certain features and functions.
Manage options Manage services Manage vendors Read more about these purposes
View preferences
{title} {title} {title}